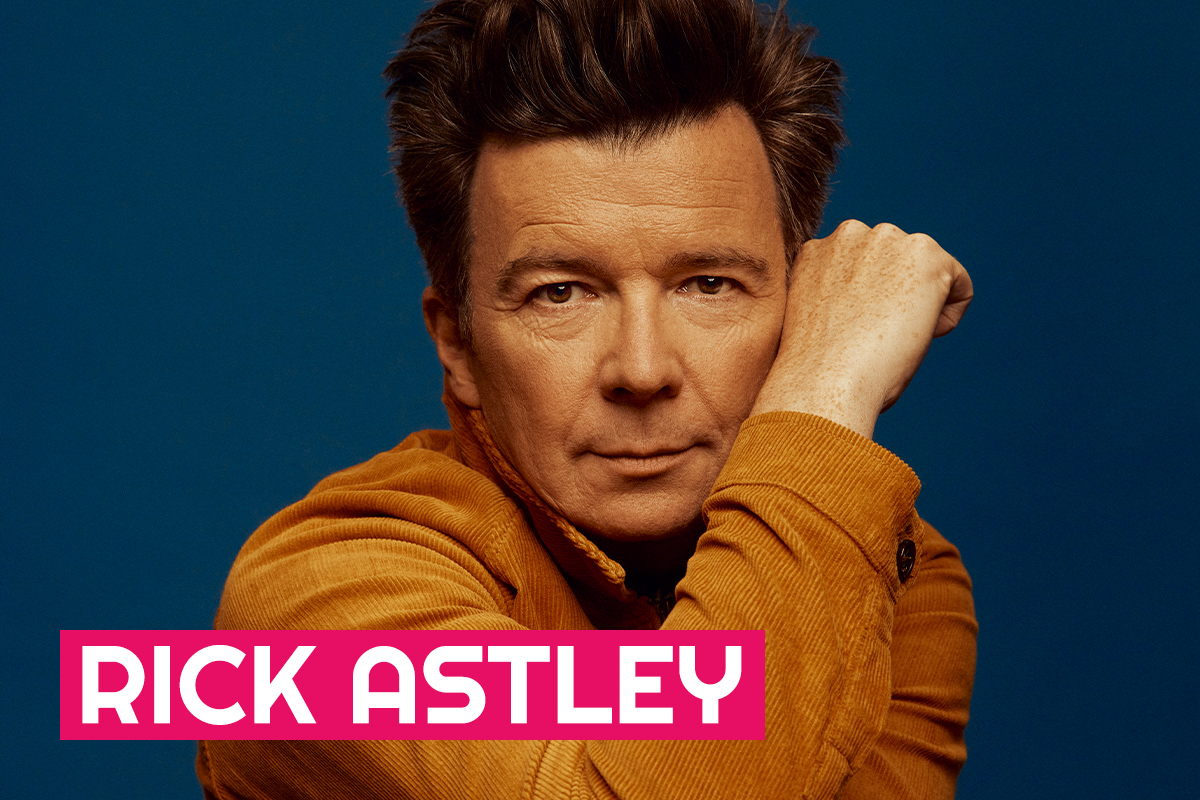 If you think you know Rick Astley, think again. The much-loved multi-million selling 80s icon returned to our ears in 2018 with the release of his stellar album ‘Beautiful Life’. Capturing the hearts of the nation, Rick impressively wrote every song, played every instrument and sang every note himself. It was an album about his obsession with music, his love for his wife and family, and his love of life itself. It is called ‘Beautiful Life’ for a very good reason. “It has been a beautiful life,” says Rick. “Maybe it didn't start out that way. There’s been tough times. But I’ve got so much to be thankful for. How many people get a chance to live out their dreams, not just once, but twice?”

The success of the album, which debuted at number 6 in the UK album charts and was also Rick’s fifth top ten album in the United Kingdom, did not go unrecognised by the masses. On Monday 19th as a result of his huge musical triumphant, he appeared in the line-up of this year’s Royal Variety performance alongside George Ezra, the West End cast of Hamilton and Clean Bandit. And Rick will certainly continue to live out his dream into the new year; after the success of his ‘Beautiful Life’ Tour which included two shows at London’s Eventim Apollo, Rick will also join fellow national treasures, Take That, on their UK 2019 tour. It will include eight nights at the O2 and five nights at Manchester Arena.

Rick Astley’s story is an extraordinary music business tale. He was a lonely boy from a broken home in a small town whose only escape route was singing. “Music saved my life, really,” he says. “My mum and dad had a horrible break up when I was very young. It was quite traumatic, if I’m honest. Singing got me out of the house, it got me into a choir, then it got me into a band and finally got me out into the world. It’s put me in so many amazing places it’s ridiculous, just because as a kid I found I had a voice.”

Rick was raised by his older siblings on a bizarre mix of prog rock, classic rock, indie rock and Northern Soul. He sang in a choir and drummed in a covers band. A little guy with a big voice, he was talent spotted at 19 by legendary 80s hit makers Stock Aitken and Waterman. He worked in their studio for a year as a tea boy, learning his craft before he got a shot at recording a single of his own. His classic 1987 solo debut Never Gonna Give You Up was a global smash, number 1 in 25 countries. Over the next five years, Rick had 13 international hit singles, including his own 1991 soulful ballad Cry For Help. The title was revealing. Although he had sold over 40 million records, Rick felt increasingly oppressed by his image as a teen crooner and disillusioned by the superficial demands of marketing and promotion. His daughter, Emilie, had just been born. In 1993, aged 27, he walked away from it all for a life of domesticity and parenthood. “I’d had enough. I never fell out of love with music, just the music business.”

That was just the end of Act 1. In 2007, the forgotten idol was rickrolled back into the public eye. The internet prank turned Never Gonna Give You Up into a viral sensation, notching up over 440 million views to date. “There was nothing I could do about that. It's not like I could send a letter to the internet and say ‘please stop’. But I thought a lot of it was hilarious. It certainly hasn't done me any harm.” Rick was back on stage by then, touring his old hits, but the renewed interest gave him the confidence to try something new. In June 2016, he released 50, an album of songs entirely written, played, sung and produced by grown up Rick. Astonishingly, it went straight to number one in the UK album charts. “No one was more surprised than me to see my name up there again, with Coldplay and Adele. My expectations were pretty low. I was just saying bollocks to it, I'll give it a shot.”

Rick describes 50 as his midlife crisis album. “I thought rather than buying a Harley-Davidson I'd make a record.” Having just reached his half century, he called it 50 as a private joke about Adele's albums, 19, 21 and 25 (he briefly considered calling his new album 52, till wiser heads prevailed). It has sold over 400,000 copies worldwide and put Rick and his superb live band back in arenas playing to tens of thousands of adoring fans. Since the release of ‘50’ he has sold over 100,000 tickets in his own right as well as playing at V Festival on a bill with Justin Bieber and Rihanna, the reopening of the Manchester Arena with Noel Gallagher and has become a regular onstage guest of one of his favourite rock bands, the Foo Fighters, performing a punked-up version of Never Gonna Give You Up. “When I made the record, I didn’t know if anyone was going to hear it,” says Rick. “So to play on these big stages in front of a sea of people singing the words back at you. It is beyond belief.”

And so began Act 3 in Rick Astley’s extraordinary career. ‘Beautiful Life’ was Rick's most personal album. “In the midst of all this madness, I just went back into my little home studio because that is what I love to do. It’s my refuge really. I was tinkering about with bits and pieces and before you know it, I was making a new record.” Once again, he wrote all the songs and played every instrument himself. “I don’t claim to be the greatest musician but I play a bit of everything, and I know I can make things sound good given the time.” On the album, he plays drums (real and programmed), guitars (acoustic and electric) and keyboards (synths and pianos). “I thought I might get co-writers and a producer involved and step it up a gear but in some ways I want to prove to myself that I can do it. I know great musicians could add something to it but, to some degree, simplicity is what makes it work. It is the sum of its parts, and all those parts are pulling in the same direction. These are songs that just do what they’ve got to do and say exactly what they’ve got to say.”

It is a very emotional album because Rick is an emotional guy. He has a bit of northern bluffness about him, a jokiness that covers vulnerabilities and can keep his feelings buttoned tight. But it all comes out when he sings. Indeed, that is probably the very reason why his voice has had the impact it has. “The album is dedicated to my wife Lene, because a lot of the songs are inspired by her,” says Rick, referencing the sentiment that underscores She Makes Me, Better Together, Every Corner and the touchingly intimate Rise Up. “We’ve been together for thirty years and she drags a lot out of me. She's had more confidence in me being able to do this, to write songs that make people feel something, than I have.” There are songs inspired by his daughter too, Empty Heart, a tender acoustic ballad of parenthood and I Need The Light, a piano- driven epic about handing the torch to a new generation. “In the 80s, we all just wanted to be on the yacht with Duran Duran. When I look at my daughter and her friends, young people seem to be more open than we ever were, thinking about fairness and what’s beneficial for all.” There are songs drawn from Rick’s simple philosophies of a life well-lived, like the sweeping Last Night On Earth and towering anthem Try. “That’s really about giving it another shot. If I hadn’t sat down in a room and dared to dream, I wouldn’t be where I am now. It’s really been a bit of a fairytale.” And there are hook-laden pop songs like Chance To Dance and Shivers because “sometimes you just want something to sing along to that makes you feel happy.”

Above all, ‘Beautiful Life’ is an album that showcases Rick Astley’s deep love of music. There are upbeat dance songs and intimate ballads, soul stormers and pop smashes. Closing track The Good Old Days is an epic, cheery homage to the records that raised him and filled his childhood with hope even in the darkest times. It is packed with cheeky lyrical references to Rick Wakeman, Supertramp, Elton John, The Beatles, The Rolling Stones, Joni Mitchell and Queen. The album finally draws to a close with Rick striking a huge gong in tribute to the kind of mad progressive rock bands that first inspired him as a wide-eyed boy. “Because, let’s face it, every great album should end with a fucking gong,” he jokes. “I’m the youngest of four and I was really raised on their record collections. My older brothers and sister definitely got me through a lot. And music did too. I know it’s so corny, it’s like a bloody Hollywood script, it really is. But it’s all true.”
Tickets
Website
Facebook
YouTube
Az oldal további használatához kérjük, járuljon hozzá a cookie-k kezeléséhez. Elfogadás Adatvédelmi nyilatkozat