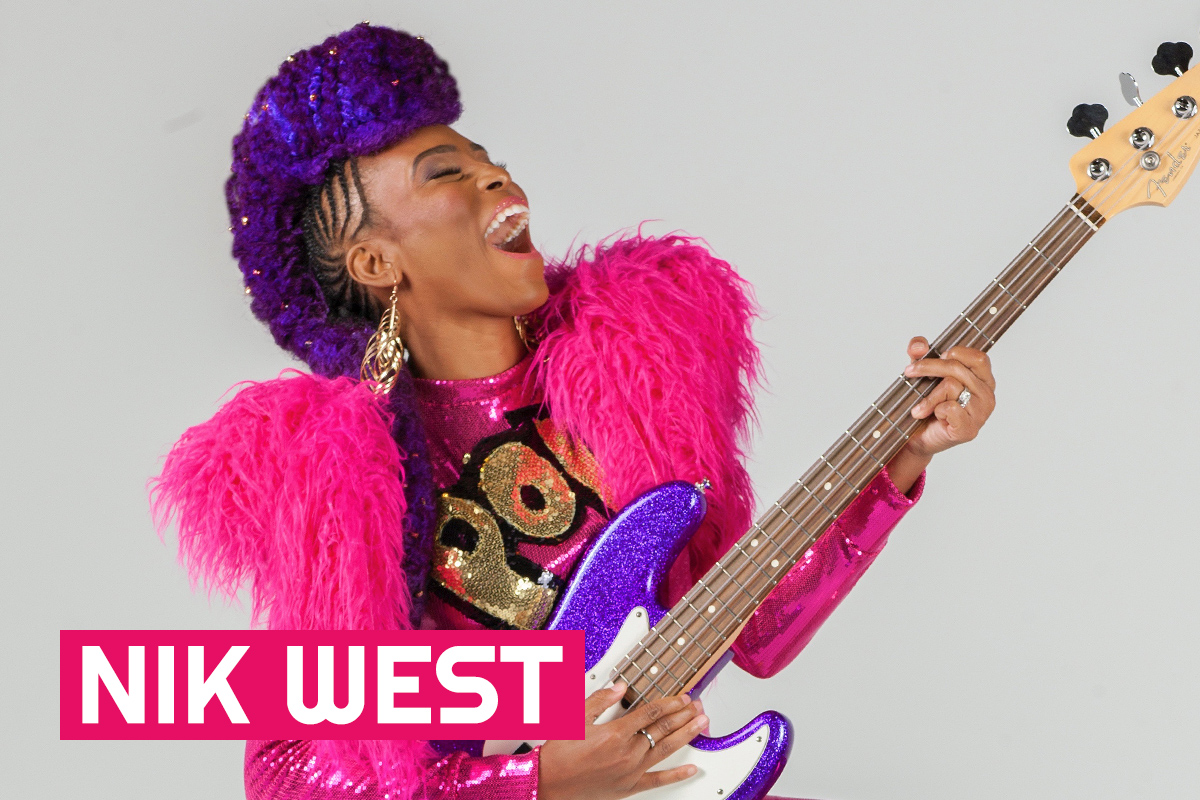 Explosive stage presence isn't enough to describe the way Nik West moves, wows, and shocks crowds everywhere. "She is a real life gumby on stage, all while singing, dancing, and slapping the hell out of her bass guitar!"With credits that include work with artists such as, Dave Stewart of Eurythmics fame, Prince, John Mayer, Glee and more, bassist, singer and songwriter Nik West is anything more than just another pretty face. Noted music journalist Alex Henderson (Billboard) sums West’s incredible talent up saying “Nik West is one 21st Century artist who isn’t lacking in the chops department. She is a young electric bassist who clearly knows her way around her instrument and plays like she has been inspired by the funky likes of Larry Graham, Louis Johnson (of Brothers Johnson fame) and Marcus Miller. Nik West is also a highly expressive singer." Known for impressively recording a cover of "Back In Black" by AC/DC, Nik shocked many rock fanatics and instantly became a new favorite of legend Steven Tyler and Lenny Kravitz.

West’s musical journey began in her hometown, Phoenix, AZ. It was there that her father — an accomplished guitarist—taught her how to play the rhythm guitar when she was just 13- years-old. Growing up in a household filled with music and creativity, West’s family includes her sisters (keys, drums, violin, and guitar) who were her first band and singing act, and an older brother, a few of which she still records with today. Though she began her musical journey playing the guitar, the left-handed phenom truly realized her calling when she discovered the bass in high school while listening to Michael Jackson's "You Wanna Be Startin Somethin". After discovering the instrument there was no stopping her. Music was not the only area West excelled in. The accomplished runway and print model and musician was a straight A student in high school and a track and field state record holder. She's so passionate about calculus that she has a blog dedicated to her love for it. Unfortunately for the universities that offered her scholarships for her mind and athletic acumen, West chose music as her career path.

While working on her first album “Just In The Nik Of Time”, Dave Stewart of Eurythmics also became acquainted with West’s work, fell in love with her soulful voice, and reached out to her to work with him on several projects. Within days she was performing with Stewart in Los Angeles to capacity crowds. She also began working with Stewart and Grammy-winning songwriter/producer Glen Ballard (Alanis Morissette, George Strait, and Michael Jackson) on a recording project. Since then, Nik has accompanied, recorded with, and jammed with a few well-known artists, such as Prince, John Mayer, Marcus Miller, Macy Gray, Esperanza Spalding, Orianthi, and more. Her talent has even peaked the attention of Bootsy Collins and Flea (RHCP). “Nik West is definitely bringing back the funk groovement and I love everything about what she stands for!” -Bootsy Collins

West’s skill was noticed early on by legendary music company, Fender. They took notice of her standout voice and funky bass playing and offered her an artist endorsement. She was also one of the first musicians to play Fender’s first 6-string bass. She is now the face of a new line of basses called the Dimension Bass and the Elite Bass that Fender came out with in 2017. She was a partner in helping to develop the bass. She is also the brainchild behind the Queen of Strings Competition, discovering, inspiring and teaching young women self esteem and discipline on an instrument.
Tickets
Website
Facebook
YouTube
Az oldal további használatához kérjük, járuljon hozzá a cookie-k kezeléséhez. Elfogadás Adatvédelmi nyilatkozat